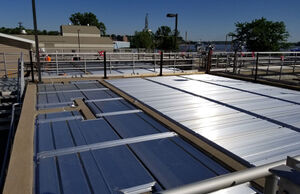 The project started in January and to maintain the project schedule, Carl A. Nelson & Company worked six days a week throughout the winter. Nearly 2/3 of the work was completed by Carl A. Nelson & Company labor. Two of the five large manholes were installed over the existing main storm line carrying storm water to the river. The work was hampered by rising river levels so plugs were used to prevent river water from backflowing into the manhole and pipe installations. Shoring was required to install the new manholes, and in some cases, dewatering was needed to keep the work area from flooding. Despite the difficult conditions, the project was completed on time.