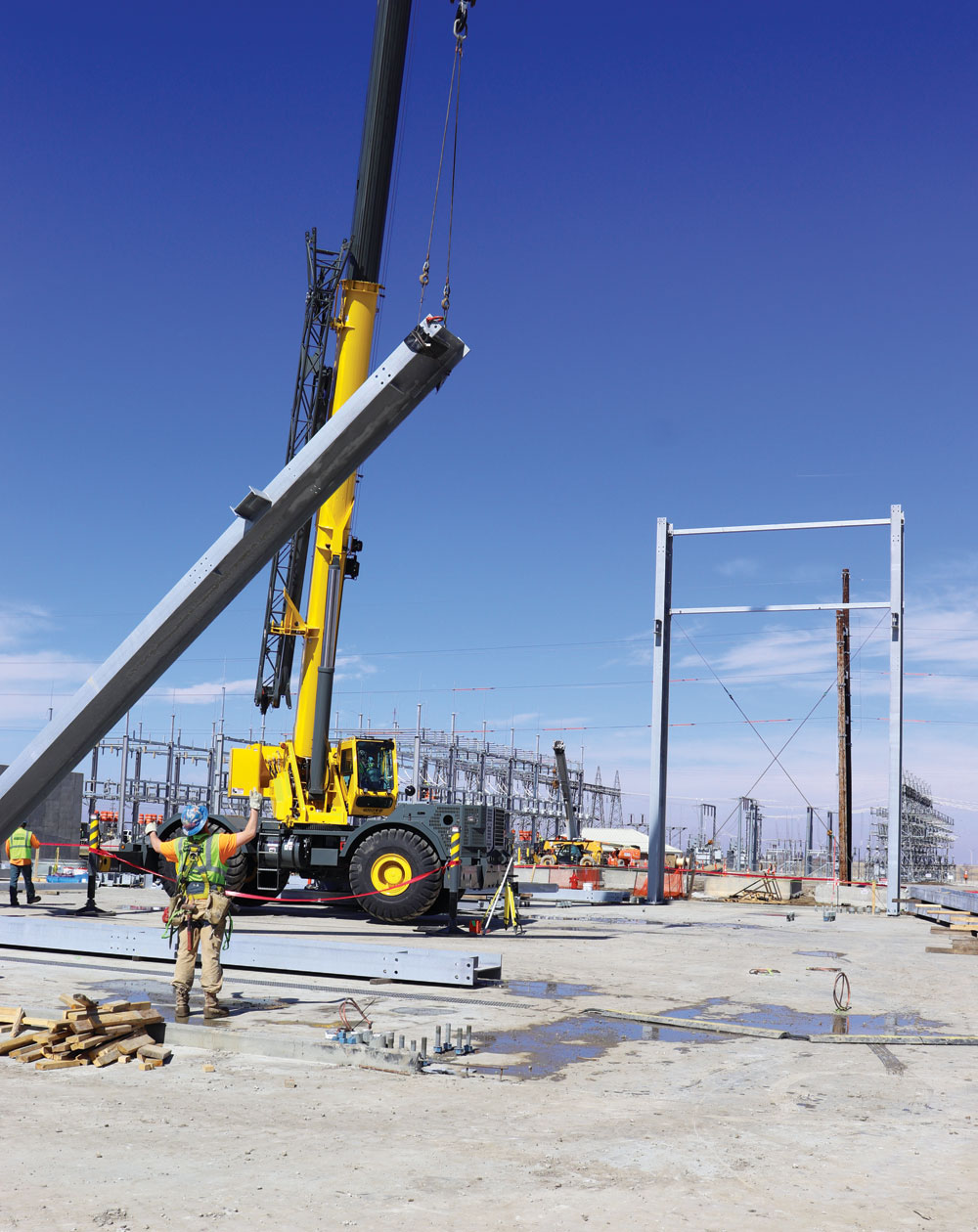 Steel goes up on an expansion of the Central Iowa Power Cooperative generating station in Creston, Iowa, where Carl A. Nelson & Company is working as a trade contractor on structure, shell and finish of the new building. (CANCO photo)

Switching out the chiller in a hospital from water- to air-cooled to save on long-term operating costs. Scrapping the original design of a laboratory to gain operating efficiency. Changing a refrigerated warehouse from a pre-engineered metal frame to a braced steel frame to avoid future maintenance headaches, and making the same change at a medical office building to reduce cost and accelerate the completion date.

Each of these is a real-world example of value engineering — an approach to designing, managing and building a project that has the goal of delivering to an Owner the lowest construction cost, most efficient project schedule and most-cost-effective final product possible, or a combination of those things, while also ensuring quality.

Yet when delivered at its best, value engineering (V.E.) often is invisible to the Owner.

“If done properly,” Carl A. Nelson & Company Vice President of Construction Chris Smith said, “the value engineering is incorporated directly into the design, so there never is a before and after to measure.”

In cases where best-value decisions are pursued from the start, it is difficult to go back and point out where time or cost was saved, and how much, because the need to change anything was averted on the front end of the project.

“We look at value engineering as part of the process,” said CANCO President Tim Seibert, P.E.

In other instances, where V.E. efforts get a later start, Owners do know precisely how much they benefitted. For instance, the superintendent of a northwest Iowa school district made no bones during a recent radio interview about what his community gained from the value focus of Carl A. Nelson & Company.

“One of the best elements CANCO brought to the table,” Sioux Center Community School District Superintendent Gary McEldowney said in February on KSOU 93.9 FM radio’s The Daily Grind, “was the value engineering — going through things very, very, very thoroughly and finding ways, within the scope of things, to make sure that we were going to be at budget, and hopefully come in even underneath what the budget might be.”

When CANCO was brought in as construction manager (CM) of the Sioux Center CSD’s new, 180,000-square-foot high school, the initial project estimate was $47.18 million — $4.68 million more than the district’s $42.5 million budget. Carl A. Nelson & Company project managers, engineers and architects reviewed the project costs and design, and were able to find savings to get the project within budget without compromising the school district’s goals or reducing project quality. 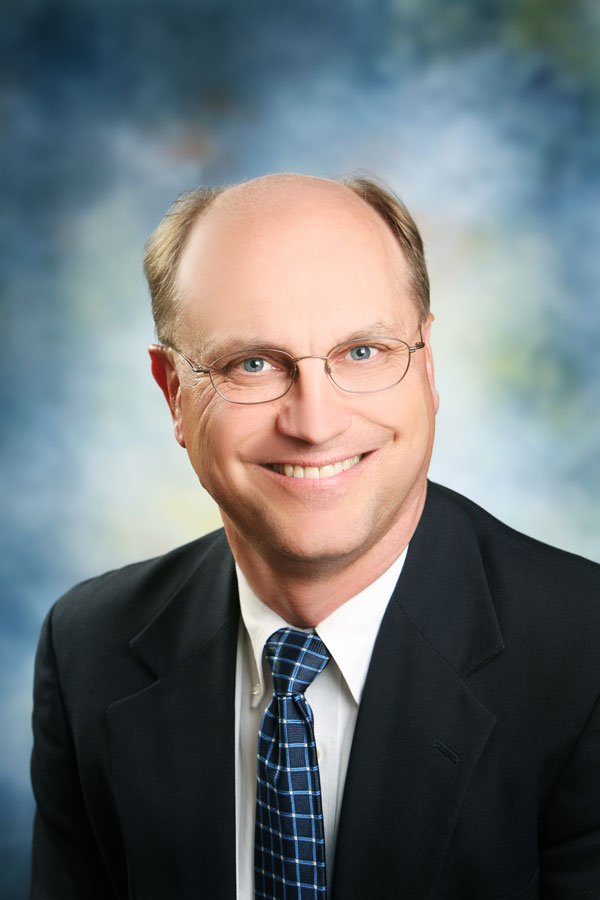 "Our philosophy is, if you provide good service, you'll get more work. That's how we're successful. Sometimes, we put more effort into (pre-construction) than what we actually get paid for. In fact, frequently that's the case."

Opportunities for value engineering cut across market segments, be it industrial, healthcare, education, laboratory, wastewater treatment, or myriad others. How value is achieved varies from project to project, and from one Owner to another. Delivering on it, meanwhile, can differ from builder to builder.

“Without a doubt,” Smith said, “value engineering efforts vary greatly among contractors. We view pre-construction services — and value engineering — to be one of the most meaningful impacts we can have on a project, therefore we invest a lot of time into the process.” 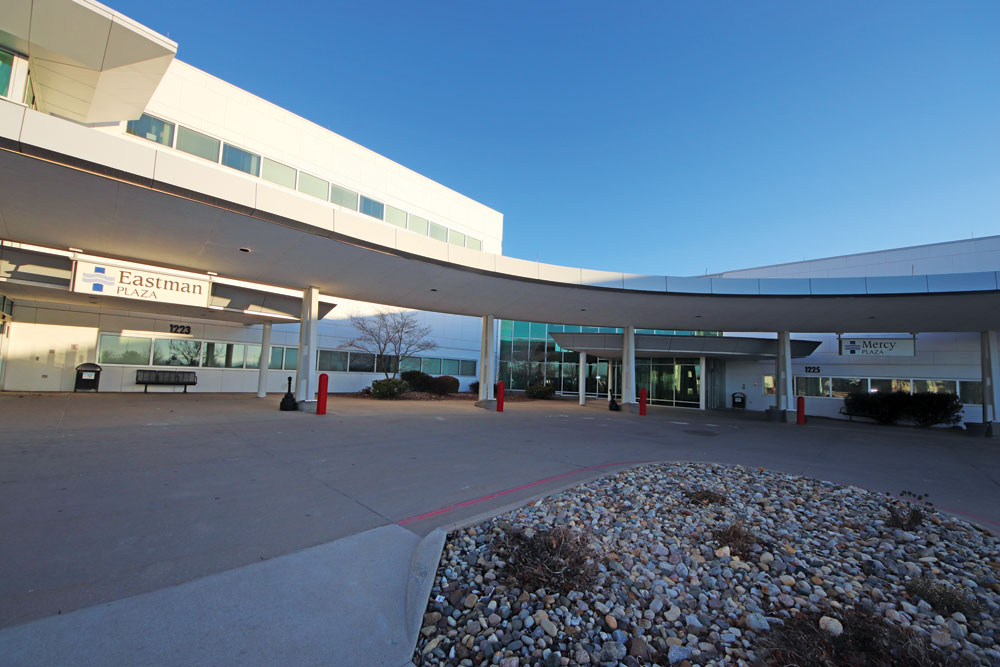 Appreciating the benefit of value engineering means first understanding what it is. And what it isn’t. Value engineering isn’t just about reducing project cost, although that can be one of the results. Providing completed projects that lead to better outcomes also falls under the definition.

In production plants, for example, he said, ease of cleaning and maintenance, and corrosion prevention, often are important enough long-term operational goals that spending more in construction to save over time becomes an important consideration.

“To me,” Seibert said, “it means that we’re helping our clients spend their money, No. 1, to make sure that what they’re spending it on is solving their business issues.”

With addressing the Owner’s needs as that first priority, the next most important consideration, he said, is meeting those needs in the most effective way possible.

It also means honoring the objectives of the Owner, and making sure a project doesn’t drift off course into “solving objectives of someone other than the Owner,” Seibert said — such as by pitting design against budget, or accepting the importance an Owner places on a particular design element that may add cost or complexity to a project. 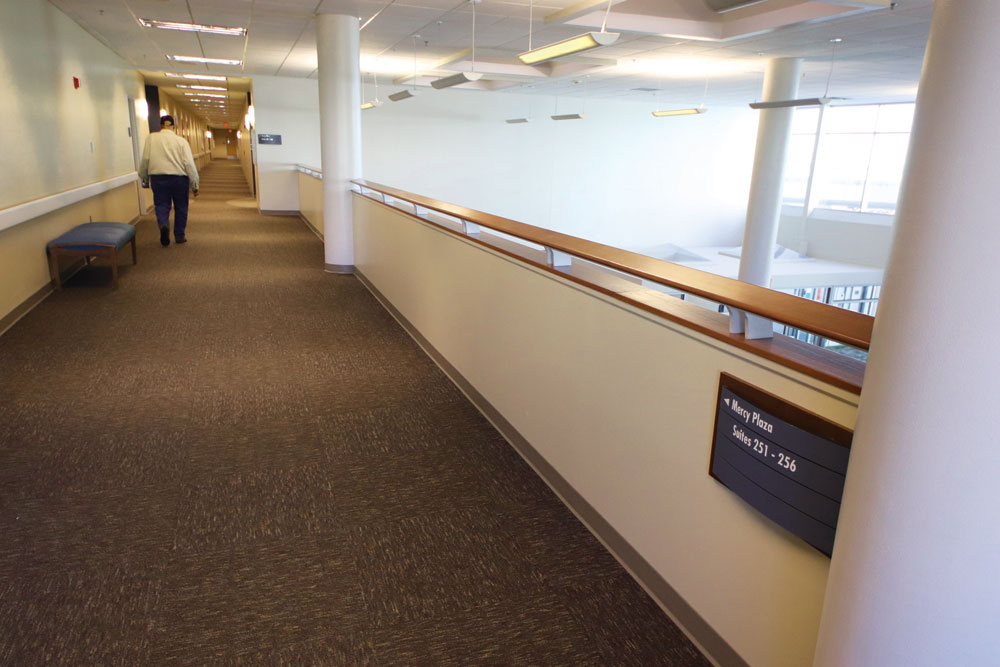 The potential for savings in cost, time and ongoing maintenance on a project is inverse to the stage at which value engineering efforts begin, with earlier being better and later becoming practically impossible.

“The numbers come from when a project gets off track,” Seibert said, “and then someone has to come in and re-do, and we don’t look at value engineering as re-doing design. It’s getting the input during design so that the first solution is the most effective solution. Not that you find a bad solution, then fix it. Constructability is an element of that.

“Making sure the design is buildable, that just in and of itself makes it a more effective solution, because it’s buildable.”

More than merely design, there also may be construction issues that are easier to address when considered in advance. Like the condition of the roads leading to a project site; whether pre-cast plant capacity to fulfill an order on time would make site-cast tilt-up concrete a better choice; or identifying a need to employ innovative construction methods to accelerate schedules and keep a project on-track during winter.

Whether focused on project budget, schedule or ongoing cost of ownership, there is an inverse relationship, Seibert said, between the ability to influence design and cost and the stage of the project. The earlier in the process value engineering comes into play, the more chance there is to affect changes to the project that will save cost, time, or future expense without major changes once construction is underway or nearing completion.

Ultimately, the aim of value engineering is to provide input to the Owner on issues of cost, schedule and constructability to allow decisions to be made that are in the Owner’s best business interest. Delivery method plays a significant role in achieving that aim.

On a design-build project, V.E. is a factor from the beginning, when best-value decisions are being made at every phase of the design and pre-construction planning.

“We like to be involved right off the bat, to understand the project goals, or the business problem that needs a solution, and so that’s fundamental,” Seibert said. “You can’t guide an Owner to the optimal solution if you don’t understand the problem well.”

Design-build — where the designer is hired by the design-build firm, which usually is a building contractor — isn’t the choice of every Owner; and some, such as school districts and other public bodies in Iowa and many other states, are restricted or prohibited by law from using it. Construction management is the next-best option for owners wanting to get a builder’s perspective on their project plans early in the process because it provides the construction manager a chance to provide input on material availability, constructability, schedule and budget during design. 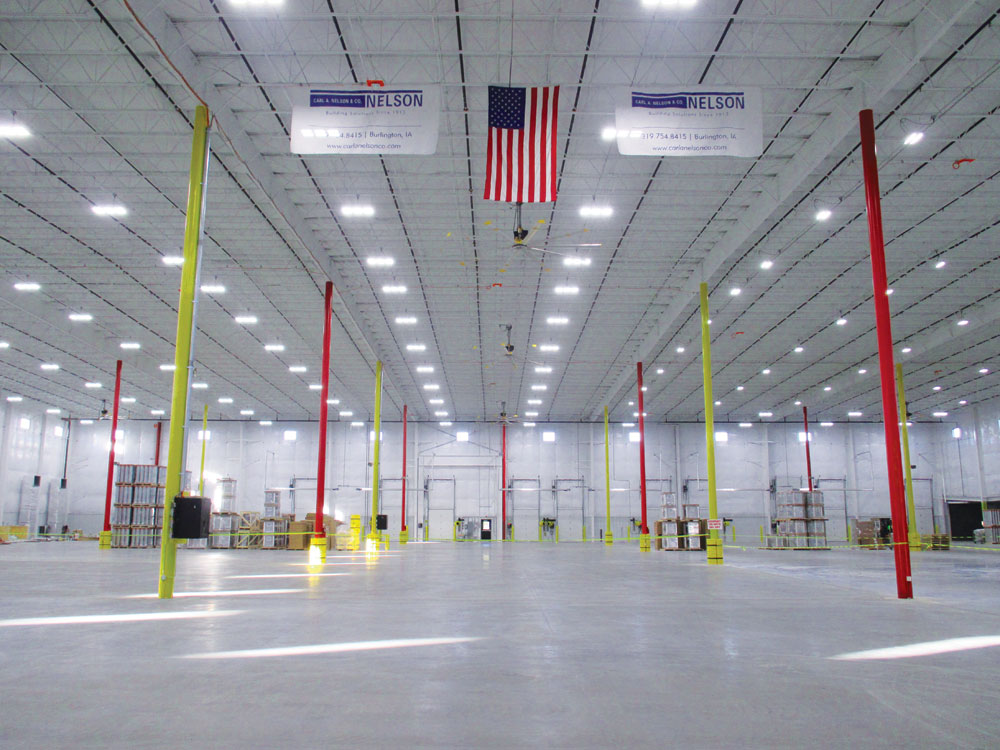 On certain construction management jobs, as in the case of the Sioux Center High School project, when a design is well underway or even complete before the CM firm comes on the scene, V.E. is addressed during pre-construction. In those instances, designs can be finalized with the construction manager’s input, or reviewed and aligned with the project budget prior to bid-letting.

It is most difficult to deliver value engineering in a general contract setting, where the design is finished and the builder is left with little or no opportunity to influence cost or constructability. In that case, it would be up to the architect or engineers to have considered best-value decisions in their plans, although in most cases, those types of firms don’t have the capacity to estimate or predict cost. Also, neither is generally obligated by contract to design to budget.

“In general contracting bid work, a lot of times, there’s not a lot of value engineering,” Seibert said, “or if there is, it’s changing things, and now we’re throwing away design and changing design in many ways. And so, your range of options that are available to you in that environment are very limited. You can’t throw everything away and start over.”

Value engineering at that point, he said, gives the concept a bad name because results typically are achieved only by reducing quality or increasing design costs to accommodate changes.

"We have had clients tell us that we earn our fees for the project before construction ever begins." 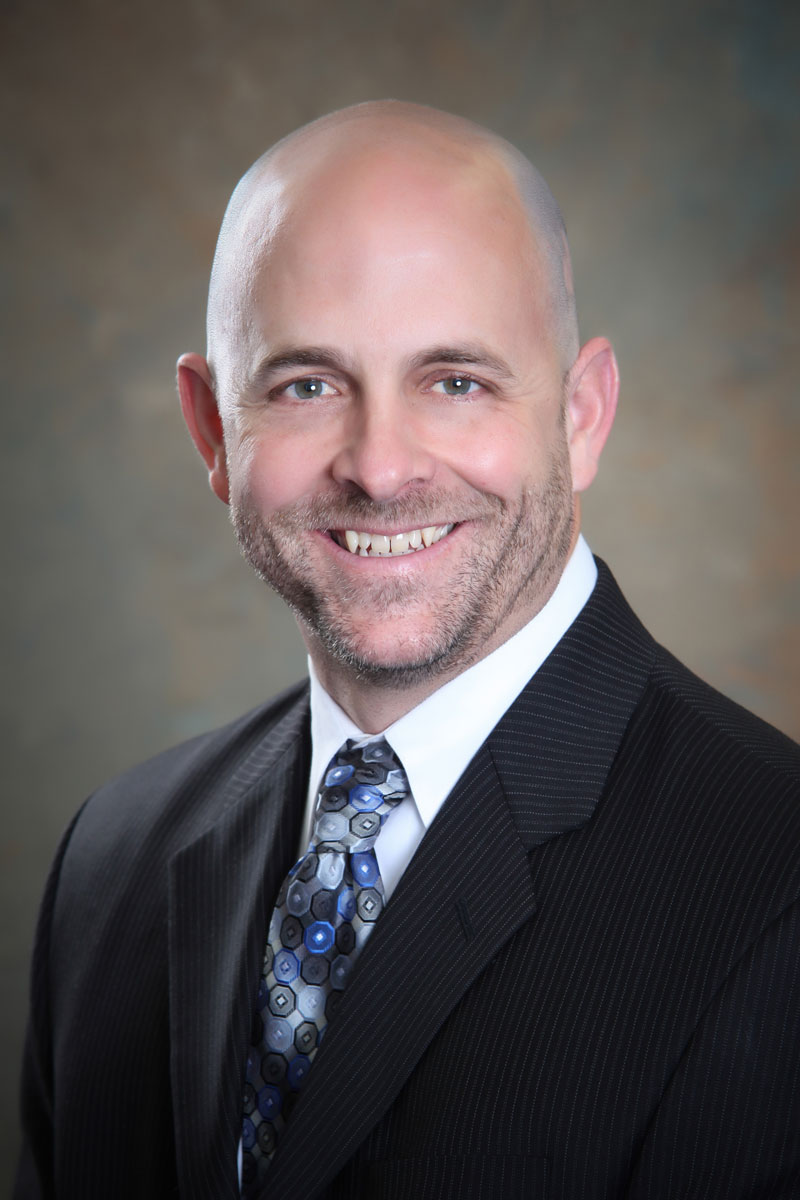 No matter where in the process the builder gets involved in a project, however, not every one has the capacity to provide effective value engineering.

“You need to be very design-savvy,” Seibert said, “meaning you need to understand the design process — the design aspects and the building codes. If you don’t, you can’t be very effective. I think that’s why we’re effective at it, because a lot of our people could design it themselves.”

“We’re just so involved in design, and so we understand that process,” Seibert said. “And it allows us to be more effective at value engineering. It’s more our experience. We do it, so we get better at it.”

At Carl A. Nelson & Company, the benefits of value engineering are seen in the volume of repeat business from clients who understand the emphasis on pre-construction services.

“We have had clients tell us that we earn our fees for the project before construction ever begins,” Smith said.

Often, though, and because the market typically undervalues it, pre-construction is a loss-leader to get new work from clients who have not experienced the benefit of that upfront approach to saving construction cost, time and future expense.

Seibert said the value of pre-construction services, which includes value engineering, can’t be told. It has to be shown. Long-term CANCO clients like Community Health Centers of Southeastern Iowa, Monsanto Company, Jefferson County Hospital and others have seen that benefit.

“Our philosophy is, if you provide good service, you’ll get more work. That’s how we are successful,” Seibert said. “Sometimes, we put more effort into it than what we actually get paid for. In fact, frequently that’s the case.

“But our goal is long-term, and our goal is to either get repeat or referral business. And so, the margins of what we make on a project is miniscule compared to client satisfaction, client referrals, and repeat business.”