On design-build and construction management projects, value engineering is an important part of Carl A. Nelson & Company's pre-construction services. Here are a few examples from CANCO projects for industrial, educational and healthcare clients that appeared in the Spring 2020 editions of the wibi newsletter, as well as some examples from our files: 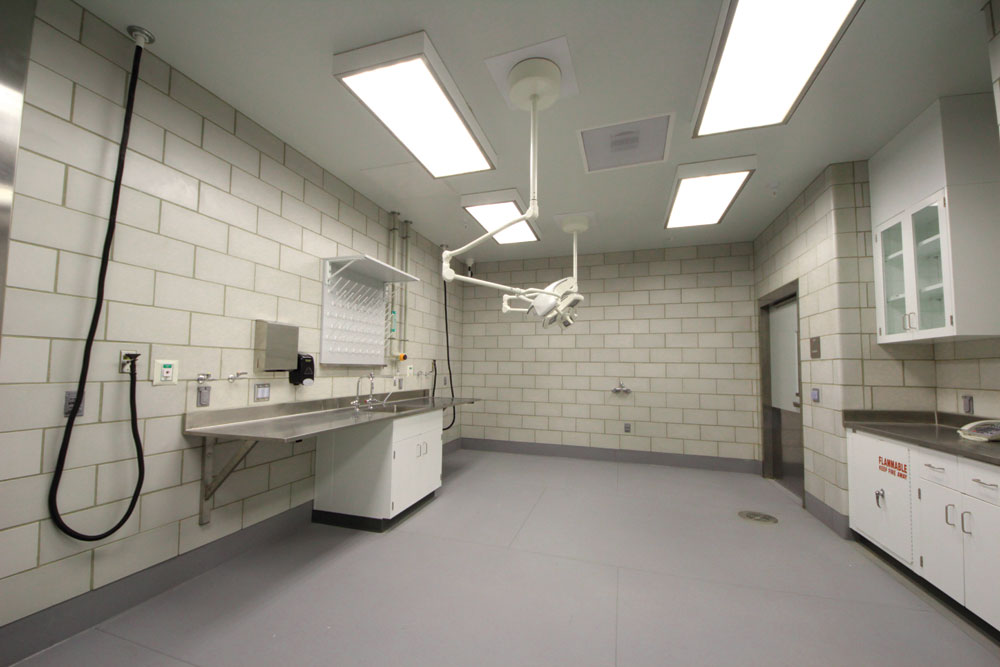 A lab inside the University of Iowa Biomedical Research Support Facility in Coralville, Iowa. (CANCO photo)

With the opportunity to build a rare design-build project for a public entity in Iowa, Carl A. Nelson & Company proposed a complete redesign of the University of Iowa’s Biomedical Research Support Facility in Coralville, Iowa.

The redesign removed the penthouses and enlarged the building’s footprint to improve operating efficiency and add storage, and to ensure the building took better advantage of the available space on the site.

This structural approach saved substantial time during construction. It had the additional benefit of enabling overhead mechanical systems to be constructed in advance of interior walls, which reduced installation costs and saved time on the construction schedule. 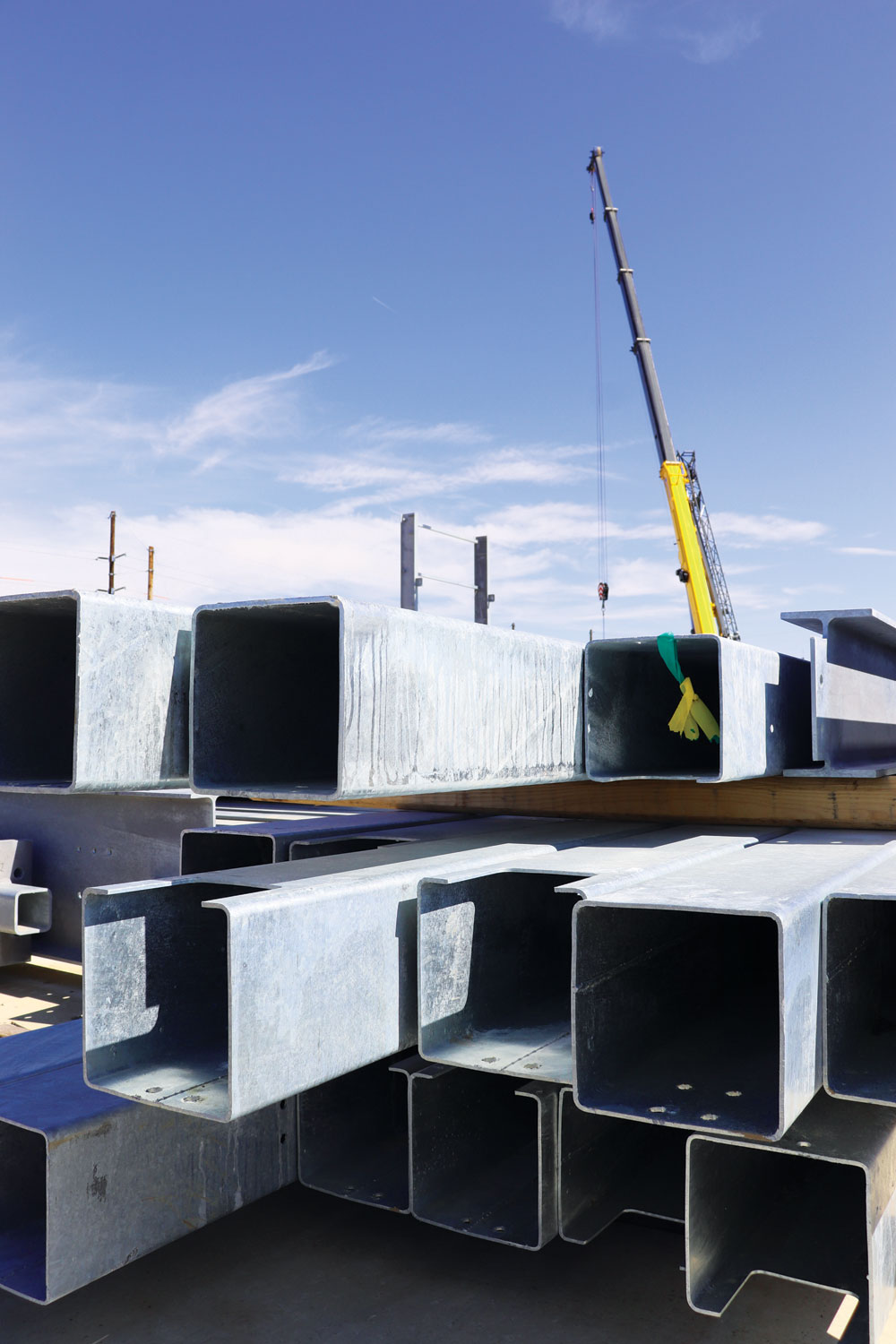 Steel is stacked on the site of the Central Iowa Power Co-op near Creston, Iowa. (CANCO photo)

Steel the choice for power project

A design-build job for Central Iowa Power Co-op at its generating station near Creston, Iowa, provided Carl A. Nelson & Company the opportunity to propose a hybrid steel frame in place of the pre-engineered metal building initially envisioned. The Engine Hall was a complicated structure including a large ridge vent, bridge crane and mezzanine. Previous experience on similar projects suggested the change to gain benefits related to engineering and schedule. The building was designed with a primary steel conventional structure, and gauged-weight secondary framing.

The change of materials accelerated the design and engineering aspects of the project.

“Given that our proposal was to design and supply based on a performance specifiation, we didn’t have to do a lot of convincing to the owner as our concept made us the lowest qualified bid,” CANCO Project Manager Ryan Harris said. 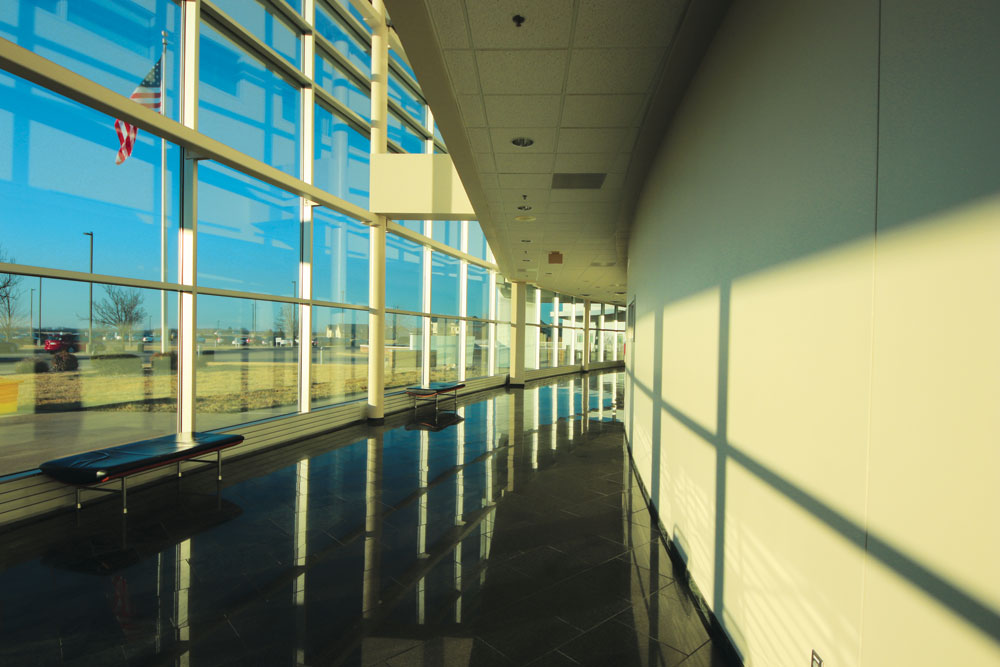 Carl A. Nelson & Company (CANCO) was just breaking ground on Great River Health’s 92,000-square-foot Eastman Plaza Medical Office Building in West Burlington, Iowa, when hospital management determined twice as much space as anticipated would be necessary.  And that the additional space, named Mercy Plaza, would have to be delivered two months earlier than the scheduled completion date for Eastman Plaza.

Great River Health requested that CANCO provide pre-construction services, on a fast-track basis, that included working with the designers to develop a cost-effective design that could be constructed in the compressed time frame.  CANCO recommended a braced structural steel frame with bar joist for the building structure.  This recommendation resulted in a 27 percent reduction in steel weight per square foot and savings of $132,000 relative to the rigid structural steel frame that was used on Eastman Plaza.  In addition, the simplified detailing and fabrication for the braced structural steel frame for Mercy Plaza resulted in the steel being delivered 12 weeks earlier than the steel for Eastman Plaza.

The collaborative efforts of Carl A. Nelson & Company and the designers resulted in many other improvements in the Mercy Plaza.  The results for Great River Health were reduced costs and projects completed on time.
Meanwhile, CANCO demonstrated innovative constructability problem-solving during the Eastman Plaza floor pours. The three-story building structure needed the first and second floors poured, on metal deck, in cold weather conditions, to create the stiffness needed for the pre-cast concrete wall panels. The basement walls enclosed the area below the first floor, which allowed this space to be easily heated for the first floor concrete pour. The second floor enclosure on this highly exposed site was much more difficult.

Working with the deck manufacturer and structural engineer, CANCO implemented a unique deck-fastening approach that allowed the composite deck to stiffen the building without the concrete in place, allowing the pre-cast wall panels to proceed immediately following the second floor deck installation.  The approach allowed the schedule to be accelerated and allowed the permanent pre-cast panels to be used for enclosure for the second floor slab pour, eliminating temporary enclosure costs. 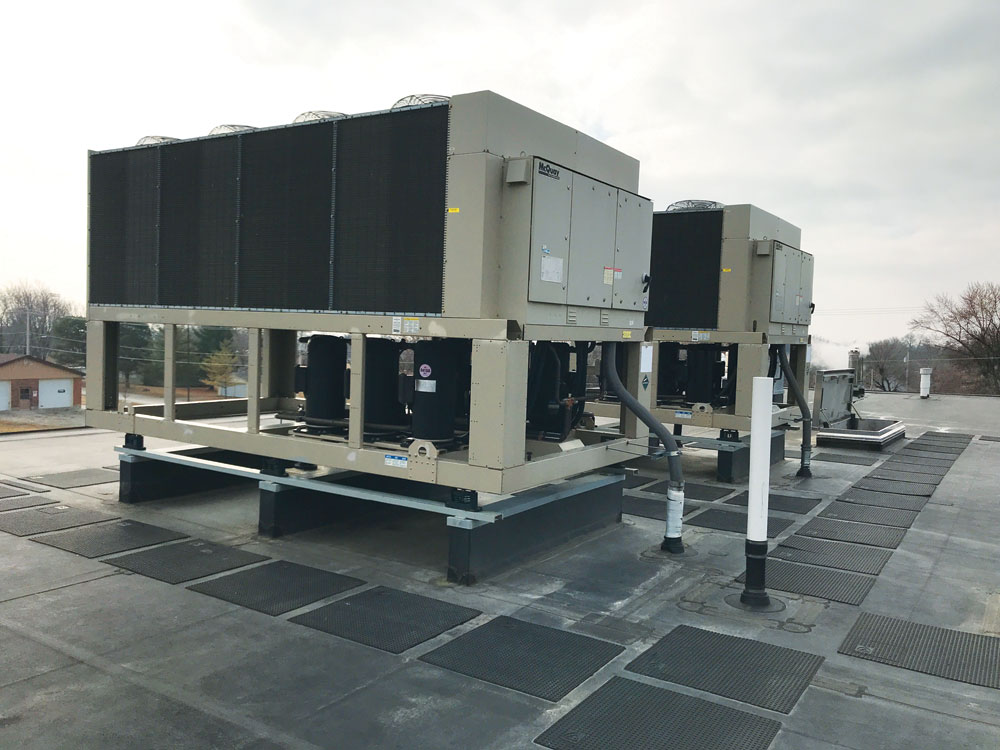 As the Construction Manager for Decatur County Hospital in Leon, Iowa, Carl A. Nelson & Company was challenged to keep the small replacement hospital within budget without sacrificing critical elements of the facility

During the early design phase, it became apparent the proposed HVAC was over budget. CANCO reviewed the mechanical design and made the recommendation to change from a water-cooled chiller to an air-cooled chiller.

After review of the supporting data provided by Carl A. Nelson & Company, the engineer agreed that our solution was better. This recommendation resulted in cost savings of $140,000 at bid time and is estimated to save about $19,000 per year on operational costs.   The total savings to the Owner over the life of the chiller will be in excess of $500,000. 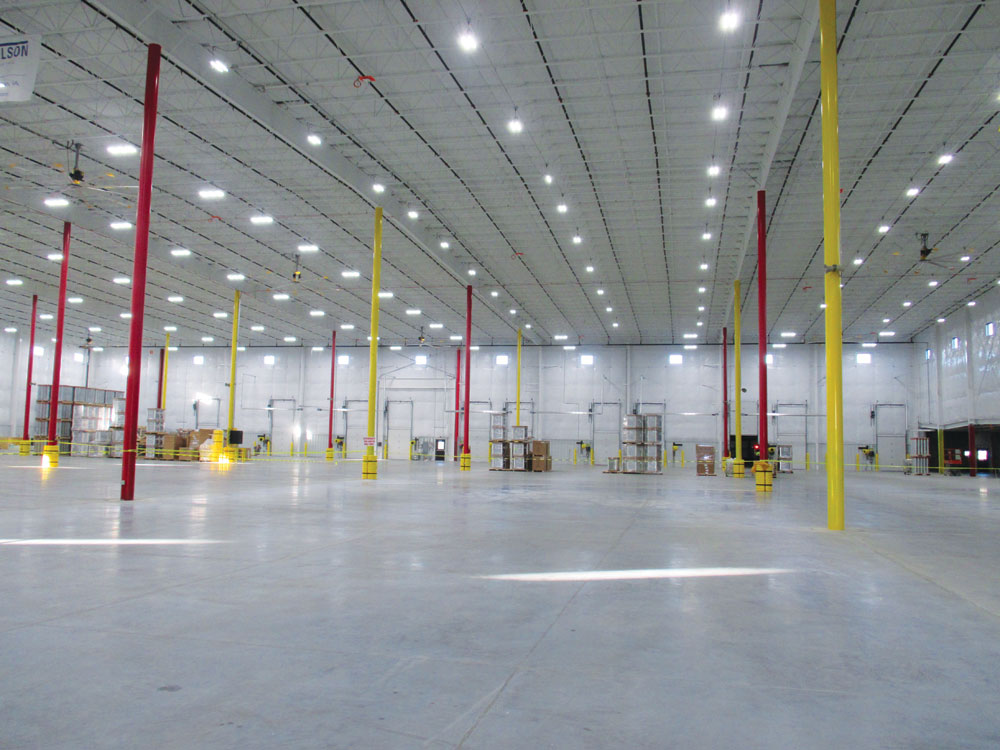 When Hearth & Home Technologies in Mount Pleasant, Iowa, engaged Carl A. Nelson & Company as design-builder for an addition to its regional distribution center, our project team identified a value engineering option that saved the Owner as much as $130,000 in project cost.

The innovative, unreinforced 6-inch slab-on-grade for the 90,000-square-foot facility, was poured with attention to detail on the joints. The Owner saved the expense of welded wire fabric, fiber mesh or reinforcing steel bars.

As of 2020, the project is several years old and there have been no customer reports of any random cracks. 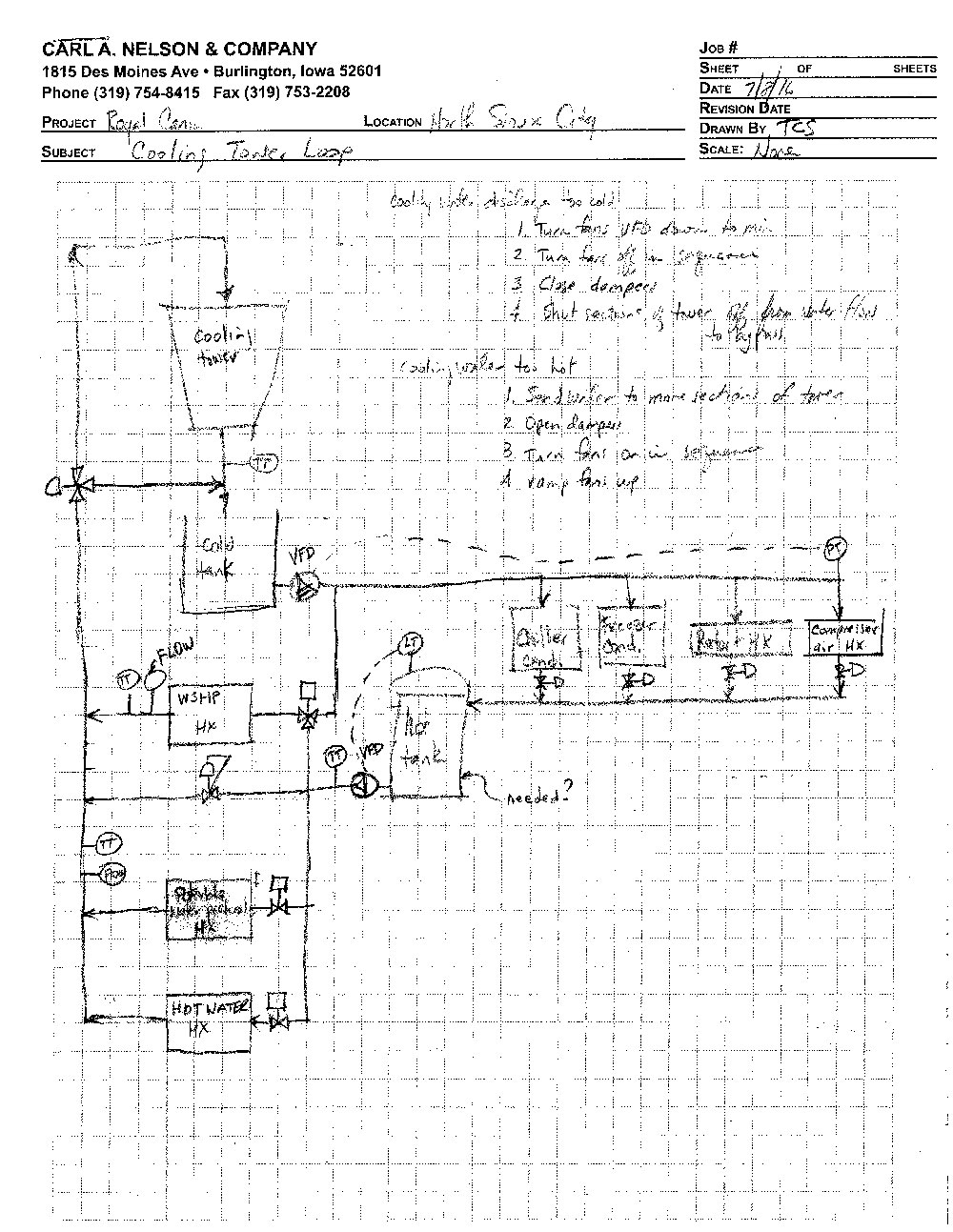 During the pre-design phase for a new wet pet food production plant for Royal Canin USA, Inc., in North Sioux City, South Dakota, efforts by Carl A. Nelson & Company to maximize efficiency of the facilty resulted in a system being devised to capture heated water from the production process to heat the facility and the potable hot water.

The design minimized utility costs for the Owner. When the plant is in production, waste heat is used, eliminating the need to rely on gas for a heat pump loop in the offices, to preheat process and domestic water supplies, to melt snow in on-site paving, to heat combustion air for steam boilers and to pre-heat the hot water heating system for the production facility itself.

Here are some other examples from our files:

One school, three ways to save

The Shenandoah Community School District in Shenandoah, Iowa, where Carl A. Nelson & Company is working as Construction Manager, is undertaking a major remodeling of its high school building. During pre-construction, CANCO identified these value engineering possibilities:

• The school was considering insulating the existing exterior walls to increase energy efficiency, but after completing a life cycle cost analysis it was determined it would have a return on investment payback period of over 100 years.

• CANCO provided valuable insight in the analysis of the existing cooling system for the high school, which had been experiencing high humidity levels with its unit ventilators that were fed by chilled water.  CANCO reviewed the historic drawings and participated in a retro-commissioning review of the existing system to try to determine the cause of the humidity.  It was determined the controls’ programming was flawed and the chiller was not operating according to the original design.  With a solid understanding of the problem, it was determined new controls and programming, a new chiller and chiller pumps would solve the problem.  The considered alternate solution of adding a dedicated outdoor air system for all the classrooms and removing the fresh air from the unit ventilators was a costly solution.  Leaving the fresh air supply on the unit ventilators instead of installing a new dedicated outdoor air system saved SCSD just shy of $500,000.

• As part of the renovation, the school wanted to upgrade their finishes.  This included all new ceiling tiles.  The architect proposed several ceiling pads based on their acoustical properties.  CANCO researched ceiling tiles and found they ranged from $2.09/SF to $3.99/SF.  The ceilings tiles were all similar, white, 2’ x 2’ square-edged tile.    With this information, the Owner selected the best value tile for an overall project savings of $108,000.

By taking advantage of these opportunities, the School Board was able to address other needs left out of the original project budget, including a much-needed upgrade to the locker room gang showers, resulting in ADA accessible, private showers in the locker rooms. A modernized Family and Consumer Science classroom also became a possibility.

For an industrial client in western Illinois in need of a margarine storage facility, Carl A. Nelson & Company recommended the Owner switch from a pre-engineered metal building design to a braced steel frame to prevent building drift. The original design called for hanging insulated metal panels from the roof to to create cold-storage rooms. Drift in the building would have negatively affected tolerances between the panels, requiring costly mitigation to prevent high-moisture vapor from infiltrating the spaces, causing freezing and exacerbating the gaps in the panels.

Spending more to save later

During design of a new pet food plant for Royal Canin Canada Company in Guelph, Ontario, Canada, Carl A. Nelson & Company convinced the Owner to move away from its desire to use composite panels on the skin of its building.

"But they don't handle forklift abuse very well," CANCO President Tim Seibert said. Or any kind of abuse, he added.

Instead, the decision was made to use precast concrete for the building's first story to prevent damage and reduce maintenance costs. Foam-core panels presented a risk for fire and were prohibited by Royal Canin's parent company, Mars, Inc., and the alternative fiber-core panels didn't span as far and were much more expensive. Compared to the cost of fiber-core panels, the maintenance benefit of pre-cast concrete made the additional upfront investment worthwhile for Royal Canin.