SIOUX CENTER, Iowa — Big crowds and much fanfare greeted the 2021 opening of the Sioux Center Community School District’s highly anticipated new high school building. By the time of a celebratory open house that August, administrators’ skills as tour guides had been finely tuned by leading interested groups through the expansive hallways, stunning gymnasium and academic spaces designed for teaching and learning in the 21st Century.

With its first school year now complete, enthusiasm for the new facility remains high. In fact, the role of tour guide for the superintendent and principals was ongoing even as the summer of 2022 was getting underway.

“I love telling our story,” said Superintendent Gary McEldowney, whose tour groups frequently include delegations from school districts throughout Iowa who want to see what Sioux Center has accomplished. “It’s a fun story to tell, and I’ll never get tired of giving those tours.” 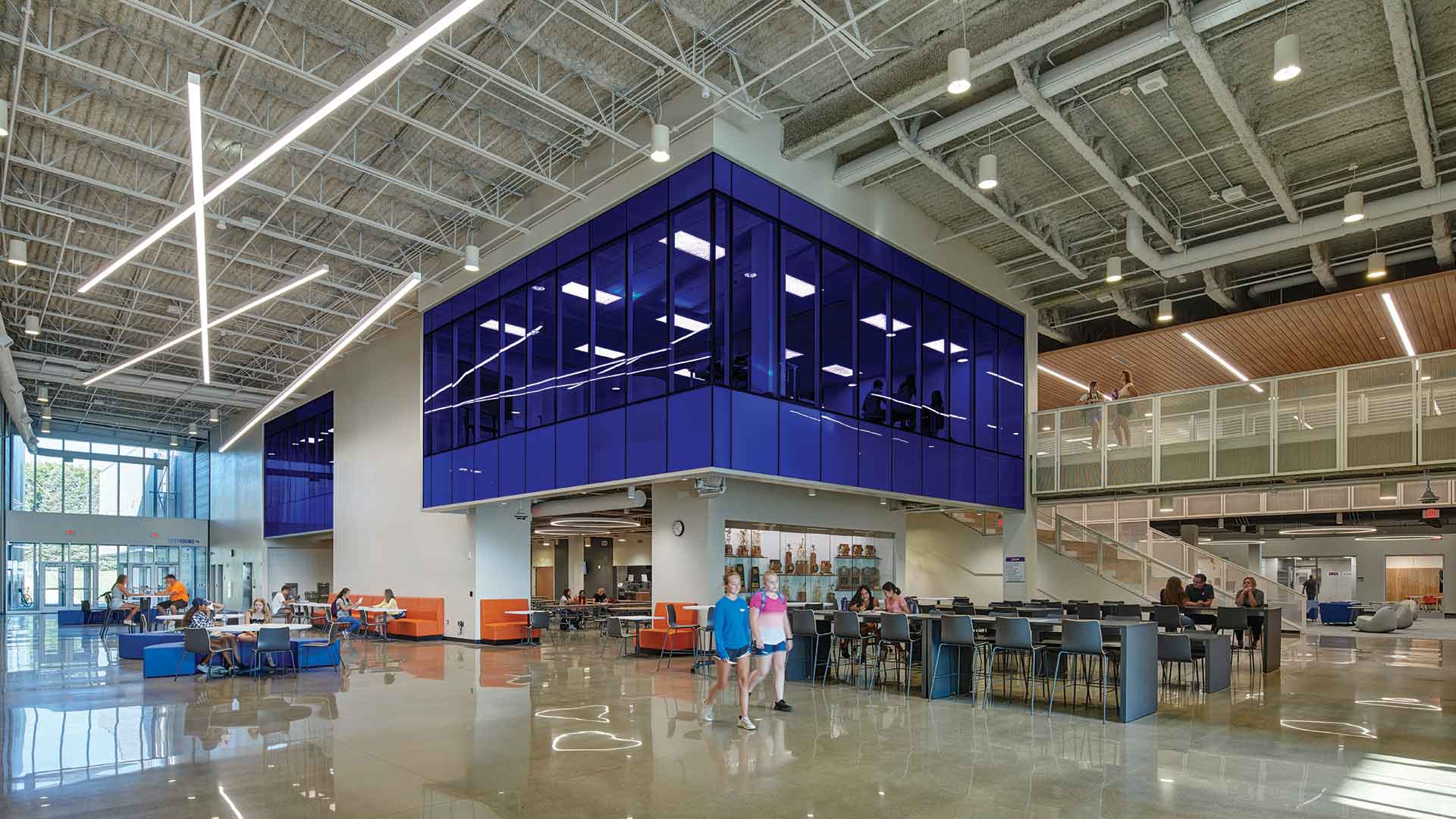 Sioux Center CSD’s story is one of a rural northwest Iowa school system that has doubled in size over the past two decades, despite competition from also-growing neighbors, and private school options that draw 38% of the district’s school-age population. Based on its growth, and following 18 months of planning and community outreach, a successful bond referendum in February 2019 led to a two-year effort to construct the new, 180,000-square-foot high school at a total cost of almost $43 million. Construction cost accounted for about $36 million of that total.

After passing the bond, the district conducted a qualifications-based selection process for hiring a construction manager agent (CMa), and engaged Carl A. Nelson & Company (CANCO) to take part in pre-construction and to lead the building project. The CANCO team was able to have an immediate, positive impact by helping to bring the design within budget by using value engineering to trim more than $4.5 million in costs without compromising space needs or reducing project quality. Once construction got underway, onsite CANCO field supervisors managed the project full-time for budget, schedule and quality.

The result was completion that was a month ahead of schedule, and under budget, and a school facility — designed by CMBA Architects — that lives up to the principles of a 21st Century Learning environment by creating a feeling of openness, and where collaboration among students and teachers is built into the structure of the space.

Adjustment to the new building, including the flow of 450 students between classes, managing lunch hours and supervision of collaborative spaces, wasn’t achieved without some growing pains, Principal Brent Town said. Yet a year in, enthusiasm for the building remains high for more than just visitors. Town said he never detected any decline in excitement from students, either.

“I think they’re very well aware of how blessed they are to go to school in a building like this,” he said, “and to have the support of a community that we do here in Sioux Center.”

The school features wide corridors and offers plenty of natural light. And throughout are numerous areas where students can study independently or work in small groups outside of a traditional classroom setting. These spaces include open and enclosed study rooms, learning stairs, a media center filled with comfy chairs, coffee shop-style booths and numerous tables and chairs in a brightly lit first-floor atrium.

“Those have just become an incredibly productive space for kids,” Town said. “Especially when you’re dealing with teenagers, when they have a space where they know they can go work, and its non-traditional, they seem to respond really well to that.”

Education is continuously evolving, and the days of “sit-and-git” are gone, Town said, referring to the defining image of a teacher standing before rows of students in desks, telling them what and how to learn. It is the flexibility to support different learning styles, teaching methods, program needs and workforce demands that makes for a 21st-century school.

Design of the school also places a strong emphasis on career and technical education. As CTE students got hands-on in labs that range from culinary arts to welding and woods to fashion, they did so in spaces located adjacent to other academic areas, rather than being in a separate building or tucked into some far-off corner. That placement, along with creation of a CTE Booster Club in 2021-22, has sparked greater excitement around and student demand for those programs, and has made them accessible to a more diverse group of students.

Special education wasn’t ignored in the design, either. Classes for special needs students are conducted in rooms that are equally spacious, well-appointed and brightly lit as the rest of the facility. Tour groups from other school districts have taken note of the placement and design of the special education classrooms, and have expressed an interest in doing some of the same, even in their existing facilities.

“People seeing our special education set up that way, you could see the wheels turning,” McEldowney said. “If we’re doing some things, and have done some things, that can help others, that’s just another benefit.”

In the new facility, with the use of window walls in classrooms and the many open areas, “the learning’s on display at all times, and the teaching’s on display at all times,” Assistant High School Principal and K-12 Activities Director Mark Hulshof said. Now, administrators in hallways can see what is going on in classrooms, and administrators can be seen taking an interest in what is going on throughout the building — both without the need to disrupt lessons. That helps to further foster collaboration. Likewise, it empowers students to take charge of their own learning, Hulshof said.

The openness, too, means different groups of students — the shop kids, the special needs kids or the Spanish-speaking kids, for example — dont get sequestered into areas where they are never exposed to their peers in other areas.

The approach to openness and collaboration extends to faculty and staff as well. In the new building, core area teachers pass from one classroom to another throughout the day, just as students do. For them, the Professional Learning Community rooms consist of an open-concept office, work area and lounge, which provide a home base throughout the day for planning and prep, collaboration and camaraderie.

In the new building, some of the teachers were on the move to different classrooms two or even three times per day, depending on a variety of factors including curriculum, teaching style and furniture preferences.

“I think they worked incredibly hard this year to establish new routines and a new culture in the new building,” Town said. “I’m very impressed and very proud of how they showed up every day ready to work (with a) positive attitude. And just like the kids, the staff know that this is, in my opinion, a once-in-a-career opportunity to be able to teach in a brand-new school, in a facility I would consider to be cutting edge.”

During the first year of its life, the new school has not only proven popular with students, staff, the community and visitors, but also has shown through use to have been well-designed and well-built. In fact, other than determining that reinforced sheetrock would have been beneficial in more locations than where it initially was installed, McEldowney said the school has been free of any significant problems with the construction. And on the occasions when an issue or a question has come up, he said CANCO’s project leaders have been quick to address it.

“We don’t have people here all day, every day,” McEldowney said, citing the two years during construction when Carl A. Nelson & Company’s site supervisors lived in Sioux Center, and the project manager visited weekly or more, “… but we still feel that support.”

In addition to providing modern high school facilities, opening the new school allowed the district to create more elbow room and new opportunities at every other grade level by spreading out across its existing buildings and creating a new intermediate program. The grades four and five intermediate school, located in the former middle school, is the district’s smallest building in terms of student population. McEldowney said the intimacy of that environment at a crucial stage in those children’s development will pay dividends down the road. Meanwhile, the elementary school and middle school — grades six through eight moved into what had been the high school — each have one less grade level, and gained additional space to grow.

Amid its 20-year enrollment boom (Sioux Center has 1,700 students Pre-K to 12), those changes enable the district to pursue an important aim.

“I can’t say enough good things about what Carl A. Nelson’s done for us and the lasting impact that this is going to have on our community. It just feels like the experience and the attention to quality and support is second to none.”

“We’re a 3A school now, “McEldowney said. “And our goal is to try to feel like a small 1A school, with the relationships and the value that comes along with that.”

At all three of the older buildings, McEldowney envisions incorporating over time the type of collaborative spaces and functions being employed at the high school, as well as the variety of furnishings that suit different learning styles and situations. For school districts that want to achieve similar goals in form and feel, Sioux Center officials recommended looking at what other school districts are doing well and incorporating those ideas. Listening also is key, McEldowney said, with attention given to teachers and support staff, as well as students, to get their ideas. And, he added, communicate with the community by explaining — and opening up the doors to show — the what and why of a project.

McEldowney also strongly recommends considering the use of CMa project delivery to help with project planning from the beginning, and then to lead the construction. Although the CANCO team was not brought onto Sioux Center’s high school project until after the bond passed, he said employing CANCO’s Construction Management Agency services through pre-construction and construction was the primary factor in building the school on-time and within budget.

“I can’t say enough good things about what Carl A. Nelson’s done for us and the lasting impact that this is going to have on our community,” McEldowney said of the services and team from CANCO. “It just feels like the experience and the attention to quality and support is second to none.”