WASHINGTON, Iowa — Amid the ongoing social distancing guidelines still in place due to the COVID-19 pandemic, the members, leaders and community supporters were denied the opportunity to have a party before the new 33,470 square-foot, $9.04 million YMCA of Washington County opened June 1.

But in small-group tours offered in late May, and as members have started the use the site, the reviews have been universally positive.

"Everyone who has come through our doors has just been blown away at what this new Y looks like in contrast to what they've had," said Amy Schulte, CEO of the YMCA of Washington County, which operates fitness facilities in the cities of Washington, Kalona and Wellman, pools in Washington and Kalona, and a childcare center in Washington.

Opening the facility was the conclusion of Phase I of a journey that began in 2013 when a feasibility study was undertaken to make plans for replacement of a now 96-year-old YMCA in Washington's downtown. After what Schulte, who was chief financial officer at the time, described as "bumps in the road" with getting a design the community would support, choosing to split a pool into a second phase of fundraising and construction, and raising the money for the new building, ground finally was broken in October 2018.

"Everyone who has come through our doors has just been blown away at what this new Y looks like in contrast to what they've had."

Once construction began, the project proceeded smoothly to completion, Schulte said. The resulting facility, constructed in a design-build process led by Carl A. Nelson & Company, has been worth the wait. The biggest new feature of the building, and the most popular, is the indoor walking track, which has been in use from 5 a.m. to 9 p.m. each day since opening, "even though it's been beautiful outside," Schulte said.

Additionally, in comparison to the downtown site, the new building offers wide open spaces and plenty of natural lighting; a gym floor that is more than twice as big as in the downtown facility, which Schulte said allows for three pickleball games to go on at once. Before, the Y's active group of pickleball players had to line up and wait for the court to open. Fitness spaces are bigger, brighter and modernly equipped, and the lobby is bright and welcoming.

"It just feels more like a community center," Schulte said, "than just a place to walk in, and go to your treadmill, and then go home. And that's what we were going for, for people to feel a part of something when they walked into this new YMCA." 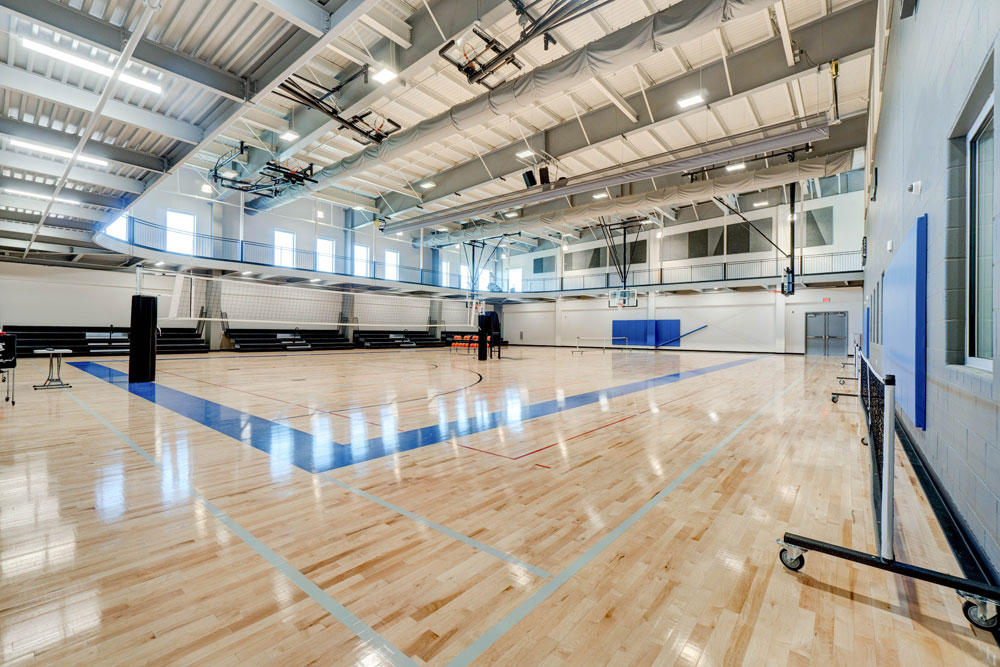 sing design-build delivery of the project, Schulte said, enabled her to focus on the demanding tasks of operating YMCA facilities in three communities without multiple contractors requiring her attention. Instead, she was able to communicate only with CANCO's project team members, and leave other construction-related matters in their hands. Schulte was complimentary of the work done by CANCO Project Manager Nick Liston during the early phase of the project planning, and Tad Morrow and Bill Curler, the project engineer and project superintendent, during the construction, calling the company's contribution to the project "invaluable."

Morrow credited a "good team" of subcontractors with helping to ensure the project met the YMCA's schedule goals and kept the project well below the guaranteed maximum price budget. He said Schulte's engagement with the process helped speed construction and make up days lost to weather.

The finished project, Morrow said, is "a nice facility for a town the size of Washington." The facility would look just as at home in a bigger community like Des Moines or Iowa City, he said. Likewise, he said, the new Y building could even help entice people to live in Washington as the population pushes south from Johnson County.

"Having a facility like that is pretty beneficial," Morrow said, "to people looking to move out of the city and commute."

For now, the YMCA of Washington County continues to operate the nearly 100-year-old pool in the downtown facility for swim lessons and adult fitness classes. Phase II planning is underway, though, with design options expected to go before the Y's board of directors in late June, and plans revealed to the public and donors for feedback by early July. Two options are being considered, Schulte said: an aquatic facility with a six-lane, competition regulation pool with whirlpool and steam room, and an alternate that also adds a family pool.

"Having a facility like that is pretty beneficial to people looking to move out of the city and commute."

Carl A. Nelson & Company's design-build team is working with the YMCA of Washington County on development of those plans.

Phase II will be the latest project where CANCO has partnered with the Washington County YMCA. Carl A. Nelson & Company was previously construction manager agent for renovation of the Y-managed, city-owned Kalona Community Center; and was a partner with the Washington Community School District for a Y-operated early childhood center.

Schulte said she appreciated the role Carl A. Nelson & Company played in bringing the Phase I project to a successful completion.