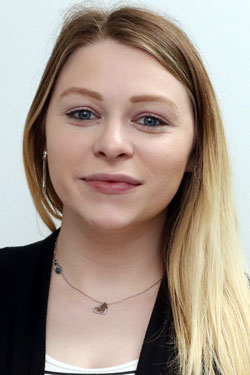 Caitlin Bliesener has a month left to go on her business degree, but has already landed her first job in her chosen career — and joined the family business in the process.

Bliesener, who attended Southeastern Community College will complete work on a bachelor of arts degree in business with a concentration on human resource management from Southern New Hampshire University, has stepped in to the role of Human Resource Associate at Carl A. Nelson & Company (CANCO).

Bliesener began her duties June 7, and hit the ground running by identifying a few tweaks she would like to see made in the on-boarding and orientation process. She also has a strong interest in employee training. In addition to acclimating to her new role, Bliesener also will continue her own professional education by pursing certifications in the human resource field.

The 2013 Burlington High School graduate's interest in human resources goes back to her own first job, when she was just 16.

"I noticed how many people hated their job," she said, going on to explain that realization was what sparked her desire to be in a field where she could have an influence on helping people feel good about where they work.

The training, onboarding and orientation process, Bliesener said, "sets the tone for their entire employment."

Her previous experience includes as a recruiter with Team Staffing Solutions in Burlington, and Alliant Credit Union as a member services representative.

CANCO prides itself on being a family company that has been handed down through generations of employees, starting with the members of Carl A. Nelson's founding team who took on the business when it became employee-owned in 1946. Three members of the current CANCO office and field leadership trace their roots in the company to that founding team, and the company boasts a collection of brothers, grandfathers, fathers and son, sisters and other family relationships among past and current employees. Bliesener's hiring adds a father-daughter duo to that mix. Field Resources Manager Jerry Bliesener, has been with CANCO for 24 years.

With her dad in construction, Caitlin Bliesener said she never saw a path to being part of the Nelson family until the HR position opened just in time for her to finish her education.

Away from the office, Caitlin Bliesener enjoys time spent with family and friends, is a self-described "huge Packers fan," and likes to pursue an interest in various arts and crafts and DIY projects.

She and her boyfriend, Zach, are expecting a son, Grayson, their first, in September.

Carl A. Nelson & Company was founded in 1913 in Burlington, Iowa. With an office also in Cedar Falls, Iowa, we perform work as a design-build, construction management and general contracting company. Visit our portfolio to learn more about the markets where we work. For employment opportunities, visit our careers page.