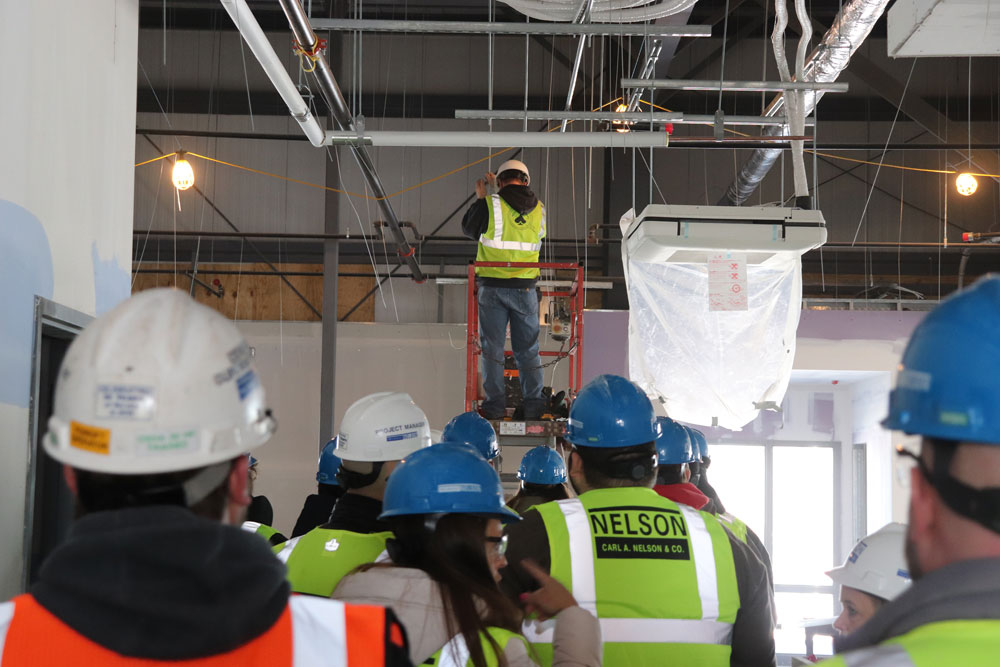 By Craig NeisesDirector of Marketing, Carl A. Nelson & Company

WASHINGTON, Iowa -- A group of about a dozen Washington County high school students from an architecture, construction and engineering course at their local Kirkwood Community College center got a glimpse Feb. 14 inside an active construction site, while also gaining insight into their career options.

During a tour of the soon-to-be new home of the YMCA of Washington County, the ACE Program students visited with builders and engineers from Carl A. Nelson & Company, the Burlington, Iowa-based design-builder on the $9.04 million, 33,470-square-foot project, to learn about career opportunities in engineering and the construction trades.

Tad Morrow, a project engineer at CANCO who led the tour, said the idea was to show "all the different parts and pieces that would be career paths that would come together in one big pot that would make a job like this happen." 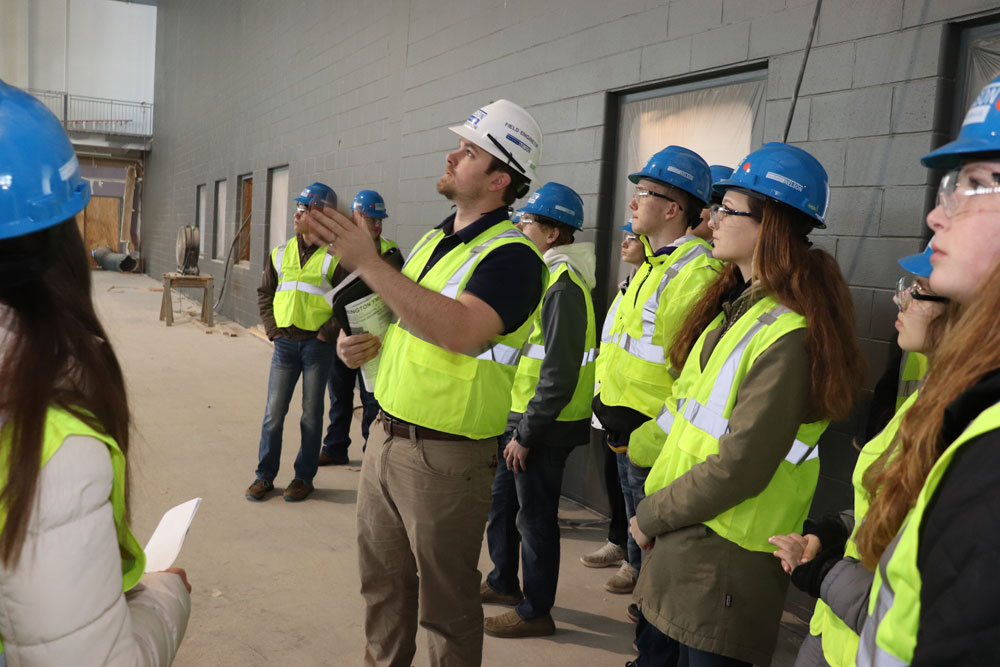 Tad Morrow, a project engineer at Carl A. Nelson & Company, gestures while showing students in the ACE program at the Kirkwood Community College Washington County Center, the gymnasium in the new YMCA of Washington County. Students with interests in architecture, engineering and construction careers who are enrolled in the class took part Feb. 14 in a tour of the project site. (CANCO photo)

The students, who range from sophomores to seniors, hale from four different high school. The college-credit ACE program is offered at Cedar Rapids-based Kirkwood's Washington County Center, as part of its Workplace Learning Connection initiative.

"We've got some pretty cool hands-on activities that the students are doing," said Aaron McGlynn, the ACE program instructor. "We're really just bringing awareness of the all the different occupations that are out there."

The visit also provided a different perspective on construction than studetns would receive on a residential jobsite, McGlynn said.

"People get tired of listening to me talk all the time," he said. "So anything they can see that are people actually doing it, living it, breathing it, is such an advantage to be able to see that."

Michael Torres, a senior at Highland High School near Riverside, said he is interested in residential construction, but also is weighing a law enforcement career. Although homebuilding remains his focus on the construction side of that decision, he said visiting the YMCA jobsite opened his eyes to the different roles on a construction site and how they work together to have success.

"It was a pretty good experience," he said. 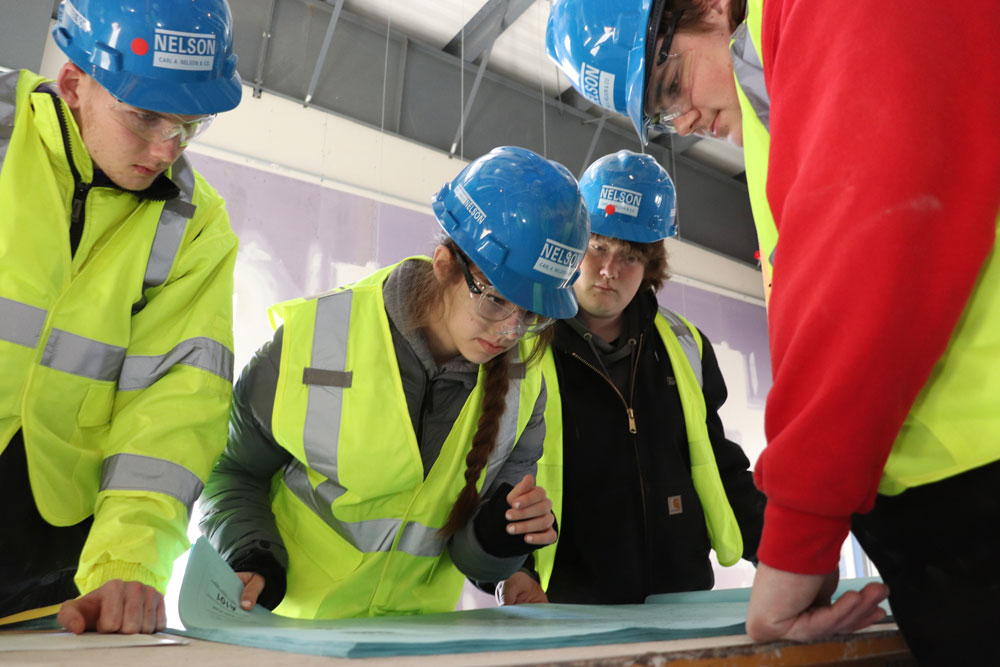 ACE program students from Washington County high schools, from left, Wyatt Sieren, Keota High School; Cloe Telleen and Adam Williams, Washington High School; and Brock Schaedler, Highland High School, participate in a challenge to answer a series of questions based on plan sets for construction of the new YMCA of Washington County building during a tour Feb. 14 at the site in Washington, Iowa. (CANCO photo)

More certain of her future path was Washington High School junior Cloe Telleen, who had been leaning toward architecture but switched gears to structural engineering after signing up for the ACE program.

"I kind of found out what I really enjoyed about designing a building," she said, "would be figuring out how to make sure that building stays standing rather than making it good."

Telleen said she wants to work on buildings that contribute to the lives of people in a community. Her visit to the YMCA jobsite, along with other field trips and class speakers, she said, has helped to reinforce her decision to switch career goals.

"I absolutely loved it," she said of the YMCA tour and program. "It was just really good to hear people genuinely care about some of these students to come in and taking the time to get to know us, and our future plans and help us out."

The opportunity to get advice on school choices, and to get insights on how the professionals' experiences might correlate to their own, was truly worthwhile, Telleen said.

Following their tour, students were broken into teams of three or four and handed plan sets used by CANCO's field and project leaders, as well as subcontractors, to build the project, and were tasked with answering a series of questions based on the documents. Their time at the project site ended after breaking again into groups depending on their interest in engineering or construction. The engineering group learned about career and education options from Morrow and CANCO Vice President of Construction, Chris Smith. The prospective builders heard about careers from CANCO General Superintendent Mike Harris. 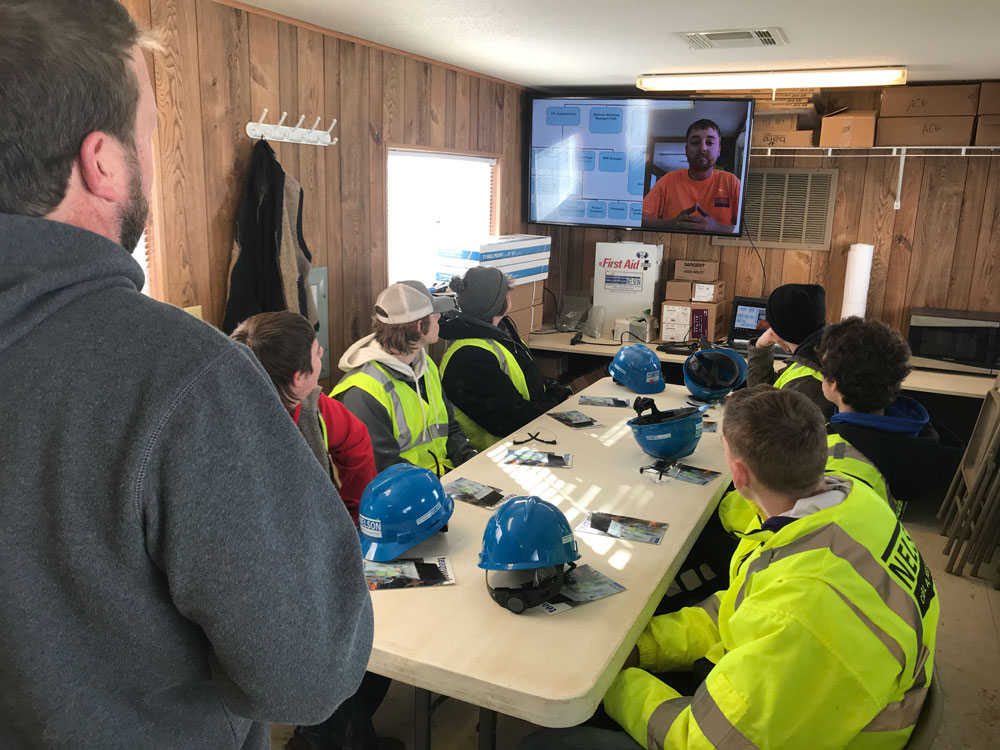 With a limited pool of talent to hire from, Smith said, sponsoring events for students like the tour of the Washington YMCA is to CANCO's potential benefit by exposing young people to careers in areas where the company is looking to hire, and getting the company's name out in front of those potential employees.

"It was a great group of students," Smith said. "Widely varying interest base; ranged from welders and electricians and plumbers to engineers and architects. And hopefully we opened their eyes on what some of the opportunities are and how to best prepare for their career."

Founded in 1913 by a Swedish immigrant, Carl A. Nelson & Company is a design-build, construction management and general contracting company with offices in Burlington, Cedar Falls and Washington, Iowa. It also operates Nelson Plant Services to perform small-project construction and maintenance in operating industrial plants; and Nelson Design, Inc., a wholly owned subsidiary that provides design and code review services for Carl A. Nelson & Company clients.