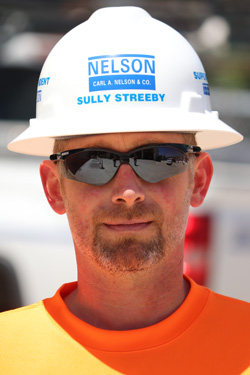 Carl A. Nelson & Company (CANCO) is pleased to announce Sully Streeby has joined the firm in the role of project superintendent. Streeby comes to CANCO will 20 years of construction experience in steel work and equipment installations.

The experienced ironworker, millwright and superintendent is an Eddyville, Iowa, native and Marine Corps veteran. Following graduation from Eddyville-Blakesburg High School in 1997, Streeby enlisted in the Marines, where he worked in logistics. That experience, and a family connection to a company that needed help with payroll and purchasing, led him to a career in construction. Although the job was office-based, he was able to pick up overtime by volunteering for weekend shutdown work in industrial maintenance at a slaughterhouse.

"It turns out I was good enough at it they wanted me out there more," Streeby said. Two decades later and the challenge of industrial projects and working at elevation, he said, is still just as cool as it was when he started.

When his first firm shut down, Streeby went to work as a connector on a steel crew, then advanced to iron foreman and eventually superintendent. He worked in that role for the past 10 years, leading steel erection, industrial piping and millwright projects, as well as chilled water and power plant piping and tunnel projects for the University of Iowa. It was at the U of I where Streeby got to know CANCO, which presented an opportunity for steady work and a chance to advance in a professional environment.

"I wanted to make a home for myself," he said. "This looked like a pretty good place to come to."

The variety of work performed by Carl A. Nelson & Company also will mean getting a chance to expand his skill set into a wider array of trades.

Streeby resides in Ottumwa, Iowa, with his wife of 20 years, Kolby. The couple have two children, Lily, 20, who attends Indian Hills Community College; and Ethan, 16, who attends Ottumwa High School. He has an associate of arts and sciences degree from Indian Hills, and enjoys woodworking, with a special interest in making rustic furniture; time with his family watching movies and playing games; and kayaking, including an annual family trip on the Current River in Missouri.