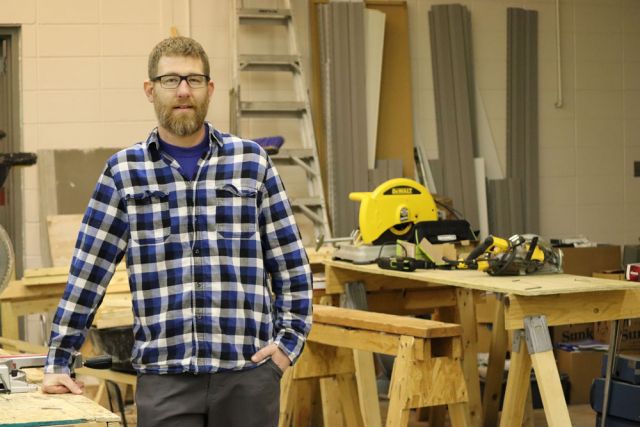 By Craig Neises
Director of Marketing, Carl A. Nelson & Company

Kyle Krieger had a steady job with Carl A. Nelson & Company – one that was rewarding in the ways of a reliable income, the ability to see a project through to completion, and knowing he had a hand in building it.

The job also offered a chance for advancement, as the 107-year-old Burlington, Iowa-based design-build, construction management and general contracting company has a solid history of promoting from within.

Yet Krieger felt called to make a change.

So, at the end of 2019, he left CANCO after two and a half years to pursue a full-time teaching career to become the new building trades teacher at Burlington High School.

For Carl A. Nelson & Company General Superintendent Mike Harris, learning in December that Krieger planned to leave was a tough moment.

Initially, Harris tried to get Krieger to stay. But he stopped trying once Krieger explained about his new job.

“To hear that Kyle was going to be the new building trades instructor at Burlington High School definitely lightened the blow of him leaving,” said Harris, who noted Krieger is the second former CANCO construction craftsman to go into a teaching career.

Tom Buckman, who has taught industrial arts for 28 years at BHS and is the school’s career and technical education department chair, said having a teacher with direct construction industry experience like Krieger’s will be invaluable as the school tries to redevelop its program.

“He’s been out there on jobs. He’s used to working with contractors and subcontractors, and getting jobs done,” Buckman said of Krieger, a 1996 graduate of BHS and a four-year veteran of the Air Force who has worked in a variety of fields in the construction industry during the past 20 years.

What he offers in building experience, Krieger lacks in classroom training. So when students in the building trades classroom at BHS returned from their winter vacation in January, they discovered not one new teacher, but two.

There was Krieger, the former construction craftsman; and Joey DeHart, a December graduate of the University of Northern Iowa with a degree in industrial technology and engineering education.

“The two of them working together, we feel,” Buckman said, “is going to be wonderful because we have a tag team of two different experiences.”

With Krieger’s experience as a foundation, and support from DeHart and the other industrial technology teachers at BHS (three of whom were Krieger’s teachers-turned-coworkers), the goal is to get the school’s building trades program back into a position to build houses.

“Between the two of us, they’re trying to build up a good construction program,” DeHart said.

As the program develops at BHS, Krieger and Buckman each said they hope to see a growing pipeline of skilled builders coming out of the school to feed into local builders.

That’s what Harris hopes for, too.

With historically low unemployment, Harris said employers in every sector are struggling to find qualified workers. Knowing there is a capable person teaching the next generation of building trades students at Burlington High School is something Harris anticipates ultimately will benefit Carl A. Nelson & Company.

“I wish that we could have kept Kyle working for CANCO,” Harris said, “but I believe in the long run his new position may be better for everyone involved.”

Seeing the good in Krieger’s career change isn’t merely a matter of professional self-interest in hiring, however.

Harris is confident the school and its students have plenty to gain, too, by “having someone who has worked in the trades and has a ‘hands on’ approach to teaching.”

For Krieger, it has been a circuitous path to a career in the classroom. He entered the Air Force right after high school, and expected to make it a career. But when he got out after four years as a USAF firefighter, he found most fire departments want their firefighters to also be paramedics. When he struggled with the practical side of that training, he turned instead to construction, and ultimately earned an associate of applied science degree in building trades at Southeastern Community College.

He started out then in residential construction, and worked a while for a company measuring and installing high-end granite and quartz countertops. Then he went to work in the wood shop of a precast concrete company before finally getting on with Carl A. Nelson & Company in 2017.

Before coming to CANCO, he got his first taste of teaching in an Iowa Workforce program at SCC for former convicts transitioning back into society. That is where he developed an interest in sharing his knowledge and experience to help people learn new skills and gain the ability to seek employment.

It was eye-opening for him, too, he said, by helping him to better appreciate the different situations people face in their lives.

Those experiences will translate well into the high school classroom, where Krieger said one student may be “someone who doesn’t swing a hammer all the time” while others “have parents and other people they work with, and know how to use saws and so on.”

Iowa law permits people with certain types of career or technical experience to enter the classroom and share their skills. Krieger said he needed a minimum of 6,000 hours of construction experience to even apply for the job.

Now that he has been hired, he has five years to complete a series of classes aimed at helping him fill in the gaps left by not going through a traditional teacher training program. He also remains open to the possibility of going back to get his bachelor’s degree.

The opportunity to teach at BHS first came up about that same time Krieger started at CANCO, but it didn’t come together. When the school came calling again in 2019, however, he was ready to give it a look – and then take the leap.

Even though it was an ambition he had held for a while, actually making the change wasn’t easy.

“I went back and forth, and had a lot of sleepless nights,” said Krieger.

In the end, the former construction craftsman feels as though he found his calling.

“I’ve bored my family with hours of construction. They don’t see it the same way I do,” Krieger said. “To finally get a kid that’s interested, and gets that opened eye when you’re explaining something to them. It’s rewarding to be able to show somebody skills and things that I have learned.”

And though their paths to the classroom differ, DeHart said being hired alongside someone without the typical teacher-training background makes sense.

“(Krieger’s) got way more experience in the construction field,” he said. “The knowledge from that is way more than I could have ever learned in the four years of college.”

It also equips Krieger to succeed in his new career.

“I think he can be a great teacher once he learns all the teacher stuff,” DeHart said. “He has all that knowledge. Now he needs to develop the teaching part.”