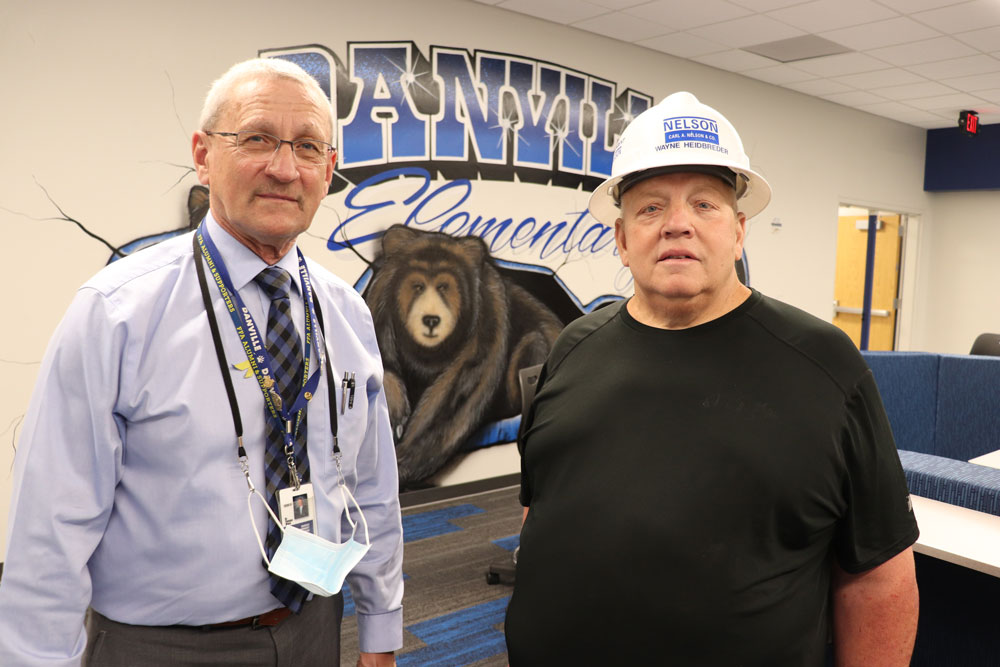 Wayne Heidbreder graduated from high school with several credits from building trades classes, and experience working for his uncle’s roofing company. But after a couple summers of hot tar and asphalt shingles, he found work where it wasn’t quite so hot.

After stints running the kitchen at a couple different locations in his hometown of Fort Madison, Iowa, however, Heidbreder returned to construction in 1974 and never left. He built homes for his first employer; paved highways and driveways for his second; and erected water towers all across the United States for his third.

He crisscrossed the country for a decade before deciding in 1990 it was time to get back home to the house he built, and where his wife, Carol, had been rearing their two sons, Todd and Tony. The opportunity to join Carl A. Nelson & Company (CANCO) that fall as a carpenter served that desire.

It also evolved into a career with the firm that now is in its 31st year.

During that span, Heidbreder helped build, or led construction of, everything from schools to hospitals to corn processing plants. But seldom in three decades has he had to travel more an hour to a job site. From 1997 to 2007, in fact, he worked 20 minutes away on jobs for a single client, Roquette America in Keokuk, Iowa.

“They just kept giving us more work,” Heidbreder said. The only breaks in that 10-year stretch were to build a pair of parking ramps in downtown Davenport, Iowa, and a clinic project in West Burlington, Iowa.

Heidbreder credits his success on the job to the superintendents he came up with, including Skip Jaeger and Jim Amann. One of the toughest lessons, though, is one Heidbreder had to learn for himself after he became superintendent, and that was to not feel like he needed to do everything himself to make sure things were done right.

He recalls being advised on a job by CANCO President Tim Seibert, P.E., to give responsibility to other members of the crew, which helped them to grow, too.

“I had to learn that,” Heidbreder said. “That’s hard to do. You’ve got to be able to trust people.”

It made a difference on projects once he was able to start delegating leadership to his foremen, he said.

Across his 30 years, industrial projects dominate Heidbreder’s resume, although less so in recent times, with educational, healthcare and recreation projects taking the lead. Most recently, he was the superintendent for an $8.7 million construction management project to build two additions and complete renovations for the Danville Community School District in Danville, Iowa.

Like learning to give trust to a foreman on a jobsite, Heidbreder said the important thing in construction management is earning the trust of the client so “they know you have their best interest in hand.”

In the end, Heidbreder called the two-year job “one of my most enjoyable.”

While the projects have varied, flood work became a semi-regular theme of Heidbreder’s career. During the Flood of 1993, the commute to work on a distribution center project in Moberly, Missouri, meant driving to Hamilton, Illinois, crossing the Mississippi River into Iowa by walking across the hydroelectric dam into Keokuk, then picking up another vehicle.

That wasn’t the end of the challenges to getting the job done, either.

“We were flooded out of the project a number of times,” said Heidbreder, who returned to the site a couple of years later when the satisfied customer hired CANCO to construct a major addition.

He also was part of the crew that installed a massive, 1,250-foot-long triple concrete box culvert, along with construction of a floodwall and levee to prevent the kind of flood damage that occurred in 1993 from happening again to the Roquette plant or Keokuk’s municipal wastewater treatment plant.

Meanwhile, one of his most interesting jobs as superintendent came on a historic preservation and flood mitigation project for the City of Fort Madison, where CANCO was the general contractor tasked with raising the historic Santa Fe Depot above flood level.

Elevating the masonry building meant tearing out the foundation on two sides and placing I-beams to support it, then jacking it up and installing a new foundation.

“On that project, not one brick moved,” Heidbreder remembered, proudly.

Now, as his retirement date nears (promising more time to enjoy his six grandchildren, fish with his sons and travel with his wife of almost 45 years), Heidbreder looks back with satisfaction on the work he did. And knowing the quality of the firm’s cadre of up-and-coming leaders, he looks ahead with confidence in the future of Carl A. Nelson & Company.