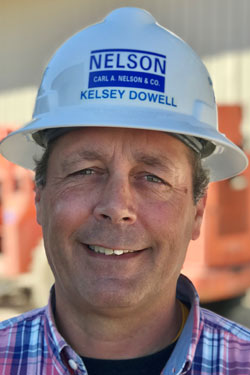 Carl A. Nelson & Company is pleased to announce the hiring Kelsey Dowell in the role of Project Superintendent. Dowell brings more than 30 years of experience in construction to his new position.

His first assignment will be as superintendent on the remodeling of Family Eye Center in Muscatine, Iowa.

Dowell, who grew up in west-central Illinois before moving to Burlington and graduating from Burlington High School in 1988, began his construction career during summers and evenings for a local masonry construction company operated by his then-pastor. He didn’t take any of the construction trades offerings at BHS, but discovered a knack for building on the job.

“I just stuck with it,” Dowell said, explaining the work paired well with his math skills and attention to detail, and that it paid well, too.

He entered the construction field full-time right after earning his diploma, moving to Las Vegas and then Colorado for more than a decade to work building tract and custom homes. In the mid-1990s, he returned to Burlington and went to work in commercial construction, starting as a carpenter and advancing to superintendent on projects including banks, a housing project in Denmark, Iowa; and additions and remodeling at West Burlington High School in West Burlington, Iowa.

In 2006, Dowell moved to Tennessee as a superintendent on commercial projects, before becoming a traveling superintendent in 2010 and working on projects across the United States for owners such as JoAnn Fabrics, Amazon Distribution and Duluth Trading. One memorable time was when he led — at the same time — construction of a Duluth Trading store and a Northern Tool store in Denton, Texas.

Dowell joined CANCO after moving back to Burlington to be near his mother, 9-year-old son and his three grandchildren.

Away from the jobsite, Dowell is an avid motorcyclist who has ridden all over the world, including separate trips with rented bikes in Romania, Hungary and other parts of Europe, Nicaragua in Central America; and a trip that started in Santiago, Chile, and ended in Deadhorse, Alaska, by way of Ushuaia, Argentina — a trip of more than 20,000 miles. He also has ridden a True X route of the U.S. as a fundraiser, traveling from Maine to Kansas to Washington, back to Kansas, then San Diego and back to Kansas before ending in Key West, Florida. That 11,000-mile trip over 11 days, he said, raised $5,600 for a children’s home in Tennessee.

When not riding, Dowell said he enjoys other outdoor activities like camping, kayaking and hunting, and time with his five children (four of them adults living in Texas, Florida, Colorado and southeast Iowa; plus his youngest in Burlington) and grandchildren, who live in Iowa. He is the son of Dianne Wood of Burlington, and the late Daniel Dowell.