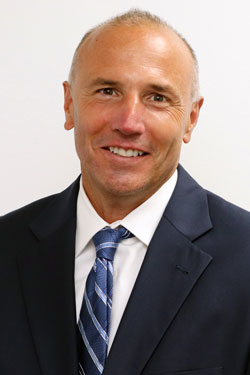 CEDAR FALLS, Iowa — A construction industry veteran with 30 years of project management and business development experience is the newest project manager in the Cedar Falls office of Carl A. Nelson & Company.

Fettkether is a familiar face in the Waterloo/Cedar Falls construction community, having previously served as vice president and president of Lockard Construction in Waterloo from 2005 to 2018.

It's the variety of the work that drew him to a career in construction, Fettkether said.

"There's something different every day," he said, adding he also enjoys the problem-solving aspect of project management.

After starting his construction career with a large residential construction company in Milwaukee, he returned to Iowa as a project manager for Cedar Rapids-based Point Builders, where he primarily worked on manufacturing facility projects in the Cedar Falls area. In 2002, he moved to Lockard Construction, which at the time had sold off its construction unit to focus on development and property management. Fettkether started with the firm as property manager for its more than 1 million SF of retail and office space, then became vice president when the company relaunched its construction business in 2005.

He served as president from 2015 to 2018. Memorable projects at Lockard, he said, include demolition of 1 million square feet of industrial facility in downtown Waterloo and then supporting plans that resulted in several hundred thousand square feet of new buildings. He also cited a 102,000 square foot assisted living and memory care facility in Baton Rouge, Louisiana.

During that time, he also returned to UNI's construction management program where he assisted the faculty as a part-time construction law instructor.

A northeast Iowa native and 1995 graduate of the University of Northern Iowa with a bachelor's degree in construction management, his construction career began during college, when he worked summers on commercial and heavy/highway projects. At CANCO, Fettkether has a chance to return to his interest in business development and pre-construction services. In addition to bolstering the business development efforts of the firm, he also will run projects.

Fettkether resides in rural Cedar Falls with his wife, Candice. Married for 24 years, the couple have three children: Bailey, 22; Alysa, 19; and Louis, 18. Away from the office, Fettkether enjoys being outdoors for just about any reason, and is a running and fitness enthusiast.